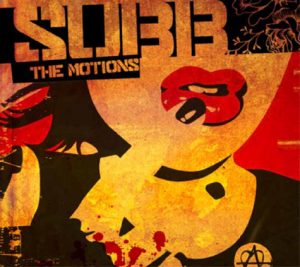 So ! First thing first, I have to say that I was pretty excited when I first heard that SUBB, one of the most brilliant bands in the whole province were hitting back the studio for a brand new opus. Huge fan for long years, I was anticipating this release hell of a lot. I just got it yesterday night, at their show, like 2 weeks after the official release date. Why do I never receive CDs from the Union Label Group ? Go figure. On the other hand, I feel way better for actually buying it, since I care a lot about these guys and I’d rather help them than just talk and talk like a dumb blas reviewer that gets everything for free and someday loses the sight of mental balance. -I’m not aiming on anyone here, by the way.- And why am I two weeks late? Looks stupid, but I don’t buy CDs at record stores anymore. I always buy CDs at shows, and because it was SUBB, I resisted to the temptation of downloading an internet rip. I’m proud of myself. Anyway..

After Daylight Savings that was, in my opinion, a bit weak compared to Until the Party Ends or Highstep to Hell, I was really expecting a huge step up from the guys, and yeah, they really outdid themselves this time. At the first listen, I was kinda unsecure cause this CD is really different than all their previous ones. I was really affraid to lose this Punk/Ska blend that got me into Subb throughout these years to the hands of xCorex screams and/or cheesy pop punk, and actually, these two elements totally completed the puzzle on this record. you got some damn cheesy -but still awesome- pop punk songs, with screams (which is kinda new for SUBB), and it’s still great. SUBB : 1, Industry : 0. To be honest with all of you, the major strength of this CD is out of all doubt the Reggae songs. “The Motions” (song #2 and first single) has played exactly 74 times between 3 AM this morning and right now, 23h45… I’m a bit of a freak, I know, but this song is killer. “Tattoo”, a Rancid cover, is another brilliant song. I know it’s not really hard to actually make a song sound better than Rancid, but yeah, hands down. Then comes “Don’t be Gone”, with a dangerous chorus la Marley, there’s too “We can Rest When We Are Dead”, an acoustic one, excellent closer. Now if we go to the other extreme, the straight punk, we really have something going on here. “The Feeling You’ve Lost it” is actually one of the best SUBB songs ever, damn aggressive and still they find a way to make the place skanked up just like Suicide Machines always did, just to name them. One thing that is pretty new with “The Motions”; SUBB now shows social conscience in it’s music. That’s rad ! Clearly supporting the animals condition in “The Remedy and the Cure”, against big corporations and sweatshops in “Make Trade Fair” and “The Factories”, and against the idiot trends in “Fashionistas”. This aspect is really nice to considerate, but still I think that these very first paces into the political punk kinda affected their lyrics. A lot less rhymes, simpler sentences and stuff, it’s a beginning -and a good one- but yeah, it changed a little bit their songwriting. Musically, we can really feel the maturity that the guys got through years. I don’t know if they reached their musical peak, but they sure outdid themselves again on this aspect. On a side note, the album covert art is pretty nice.

Okay. Let’s go for my personal highlights now. As “The Motions” stands as my absolute crush, I’ll still point out the other songs that really got my attention. “A little more of Chomsky” has a damn chorus that I actually can’t get out of my head. “I’ve got it all Wrong” is a real simple upbeat ska song that is really really sounding like earlier Suicide Machines stuff, without the Jason Navarro’s harsh voice, for sure. The I’ll go with “The Feeling You’ve lost It” that actually made the crowd going nuts yesternight, awesome song. I would have personally deleted the screaming parts, but anyway.

Okay so I’m out with all of this. There’s too much to say about this album to be honest. 16 songs, lots of eclectic stuff, you guys all need this CD, I can tell. “The Motions”, along with “Keep Your Heart”(The Loved Ones) and “War Profiteering is Killing Us All” (Suicide Machines) will finally be shown the access to my personal Hall of Fame. Let’s give it up for the 3 new hall of famers ! The summer is finally here and for once I really feel like I have some new stuff to listen in my spare time and in my car, which is incredible. Hands down to the guys !!